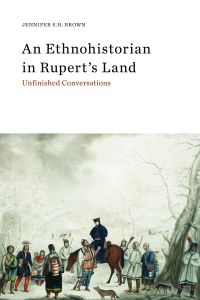 In 1670, the ancient homeland of the Cree and Ojibwe people of Hudson Bay became known to the English entrepreneurs of the Hudson’s Bay Company as Rupert’s Land, after the founder and absentee landlord, Prince Rupert. For four decades, Jennifer S. H. Brown has examined the complex relationships that developed among the newcomers and the Algonquian communities—who hosted and tolerated the fur traders—and later, the missionaries, anthropologists, and others who found their way into Indigenous lives and territories. The eighteen essays gathered in this book explore Brown’s investigations into the surprising range of interactions among Indigenous people and newcomers as they met or observed one another from a distance, and as they competed, compromised, and rejected or adapted to change.

While diverse in their subject matter, the essays have thematic unity in their focus on the old HBC territory and its peoples from the 1600s to the present. More than an anthology, the chapters of An Ethnohistorian in Rupert’s Land provide examples of Brown’s exceptional skill in the close study of texts, including oral documents, images, artifacts, and other cultural expressions. The volume as a whole represents the scholarly evolution of one of the leading ethnohistorians in Canada and the United States.

Jennifer S. H. Brown taught history at the University of Winnipeg for twenty-eight years and held a Canada Research Chair in Aboriginal history from 2004 to 2011. She served as director of the Centre for Rupert’s Land Studies, which focuses on Aboriginal peoples and the fur trade of the Hudson Bay watershed, from 1996 to 2010. She is the editor of the Rupert’s Land Record Society documentary series (McGill-Queen’s University Press), which publishes original materials on Aboriginal and fur trade history. She now resides in Denver, Colorado, where she continues her scholarly work.