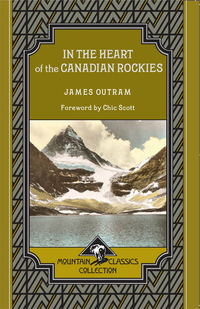 There is a wonderful fascination about mountains. Their massive grandeur, majesty of lofty height, splendour of striking outline crag and pinnacle and precipice seem to appeal both to the intellect and to the inmost soul of man, and to compel a mingled reverence and love ... James Outram First published in 1923, In the Heart of the Canadian Rockies is Outram's record of his adventures and exploits in the early years of the 20th century among the massive mountains straddling the Alberta/British Columbia boundary. Throughout his time in western Canada, Outram crossed paths with numerous colourful characters Swiss guides, hunters, cowboys and outfitters, as well as previous climbers and explorers, whose journeys he discusses at length. It is this comprehensive detailing, not only of Outram's own climbs but also those of mountaineers who preceded him, that gives In the Heart of the Canadian Rockies the air of a grand overview of the early years of climbing in western Canada. With its many references also to burgeoning alpine towns in both Alberta and British Columbia, this third volume in the Mountain Classics Collection is an open invitation for readers, climbers and adventurers to follow in the footsteps of this avid early mountaineer and passionate outdoorsman into the rugged, beautiful landscape of the western Canadian mountains.

Born in 1864 in London, England, James Outram was a Church of England clergyman, mountaineer, author, businessman, militia officer and Orangeman who came to Canada at the turn of the 20th century after travelling and climbing throughout Europe. As a relatively new climber, Outram made numerous impressive ascents in the Rockies and Columbias in 1900, 1901 and 1902. In 1925, after years living in Calgary, Alberta, he retired in Victoria, B.C.