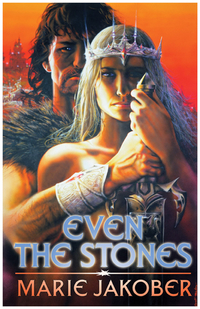 A young queen must confront her destiny, and overcome the powerful forces arrayed against her

When she is kidnapped by enemy invaders, Marwen of Kamilan must escape her oppressive foe and reclaim her throne. But it will be a fight that will test the very limits of her will, both in an ill-matched war against her former captors, and in the political intrigues that await her in her own land. It is only with the help of a battle hardened soldier, that Marwen finds the strength to face her greatest fears, and discovers that love may be the most dangerous weapon of all.

Marie Jakober first gained international recognition at age 13 with the publication of her poem "The Fairy Queen". Since then she has written five books, including The Mind Gods, and Sandinista, which won the 1985 Georges Bugnet Award for Fiction. She is a graduate of Carleton University with distinction, and has toured, lectured, and served on numerous SF panels. She lives in Calgary, Canada.